In July 2019, I was deployed to La Paz – Bolivia as a senior EU volunteer for the Fundacion Munasim Kullakita (FMK). 14 months after my return to Italy, and I can now take stock of what this year has brought and meant to me. Although this year has been very unusual – first because of the social and political conflicts taking place in the country, and then because of the COVID-19 pandemics – I can say that the overall experience has been very positive and enriching.

The Fundación Munasim Kullakita (FMK) is a Bolivian NGO based in El Alto. Since 2008, the association has been committed to preventing, eradicating, and minimising the effects of child sexual exploitation, using an innovative approach that involves the community in all its phases. In addition to working with victims of sexual exploitation and trafficking, the FMK also works with people living on the streets and, more recently, with Venezuelan migrants and asylum seekers fleeing the economic and social crisis in their country.

Within the association, I had many opportunities to work; as the association is very active on many fronts and works with several target populations in different parts of the country, it was very interesting to combine fieldwork with coordination and monitoring tasks, and to carry out activities while being totally immersed in the local context. Indeed, the association is Bolivian and, apart from the volunteers, all the staff is local. In addition, the headquarters are located in El Alto – a densely populated city at an altitude of 4,000 m, accessible by cable car from La Paz – considered to be the most traditional and folkloric Andean place in Bolivia, where the colorful markets populated by men and women in traditional dress offer an exceptional aerial view from the cable car that glides over the daily frenzy.

In terms of fieldwork, throughout the year I had the opportunity to work in two shelters, which take in children, adolescents, and young women who are victims of sexual exploitation and trafficking and support them and their families throughout a rehabilitation process. I have also contributed to identifying and working with Venezuelan migrants and asylum seekers arriving in Bolivia after turbulent journeys on regular and irregular migration routes. These two experiences were enriching and allowed me to see many different realities at close quarters. Unfortunately, my activities in the field were interrupted by two main contingencies that forced the whole association to rethink strategies and the best approaches to continue working with the population, and therefore I also had to adapt to new tasks and working methods, but as I like to think every cloud has a silver lining. 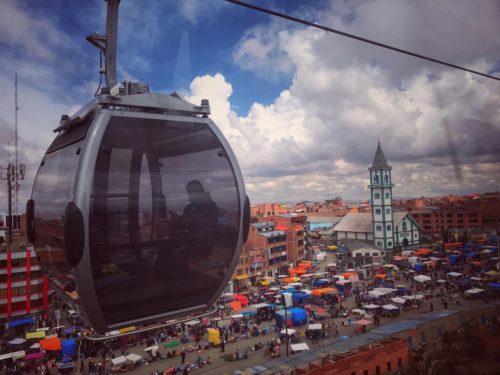 In October, following the presidential elections, a wave of protests and conflicts erupted throughout the country, making it dangerous to walk the streets until December. This had a huge impact on the lives of Bolivians: some people lost their loved ones in violent clashes, the economy stagnated, the social context became very tense and the country showed how deeply divided it was despite years of political interventions aimed at generating inclusion and overcoming the cultural and economic divide. The Fundación Munasim Kullakita, with the support of UNICEF Bolivia, saw the opportunity to try to generate social cohesion by proposing a humanitarian intervention aimed at building a culture of peace throughout the country. In this context, I had the chance to coordinate the intervention and work with local staff in the areas most affected by social conflict until March. 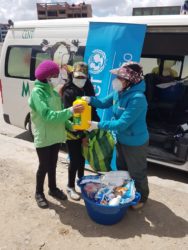 The month of March was another unfortunate turning point: Bolivia announced its first cases of Coronavirus, and a total lockdown was put in place on the 23rd of the same month. This added to the negative impact that social and political conflicts had already had by the end of 2019: since March, Bolivia has been under severe social, economic, political, and health strain. Due to this new contingency, we had to interrupt the peace-building project that had only begun a few months earlier, but once again the association and UNICEF Bolivia were able to develop a new strategy to be able to continue helping those most in need in these times of pandemic. The emergency intervention launched at the end of March is still ongoing: the humanitarian project in response to the effects of COVID-19 on vulnerable local populations and Venezuelan migrants and asylum seekers has provided basic support to many children and families in several regions of Bolivia, where the health emergency is still ongoing. Although since March I have had to strictly follow the prevention and protection protocols and therefore work mainly at home, I have had the opportunity to coordinate and monitor the project’s efforts, which has given me invaluable insight into the management and monitoring activities.

Although this volunteering experience was marked by difficult periods linked to the health situation, it was above all rich in lessons and discoveries, both on a professional and personal level. The need for international solidarity is as great as ever and I hope that more and more volunteers will experience a journey as enriching and inspiring as this one.