It all started with visiting several centers, hospitals, and schools in order to establish the first contact, understand their needs, and try to set up a collaboration in which I can transmit my knowledge as a dietician. At present, I work with several of these beneficiaries with the primary objective of nutritional education.

If I had to come back to a specific project of this mission, I would talk about the week of October 7, 2020, which was a special week; it was the “week of taste”. For this occasion, the French school of Tirana proposed me to participate in their activities and to intervene in each class on this theme.

I then created small workshops on taste, adapted according to the age of the children. For the youngest children, i.e. the 2 kindergarten classes, I first had them taste a pinch of sugar and salt so that they could distinguish between the two different tastes. Afterward, they received a small piece of different foods. The goal of the game was to guess which food it was and to classify it as sweet or salty. During this tasting, they could taste a piece of apple, orange, olive, potato, carrot, cucumber, and bell pepper. 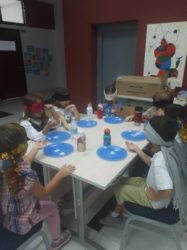 For the 4 primary classes and the 20 or so middle school students, the workshop was based on the same principle but in greater depth.  After mentioning the 4 tastes that can be found in food (salty, sweet, sour, and bitter), they observed a diagram showing the different places on our tongue where our taste buds detect these different tastes. They then each received a plate with the four flavors in small quantities via a pinch of salt, sugar, a drop of vinegar, and a piece of dark chocolate. The tasting consisted of making a good distinction between the 4 flavors and to be attentive to where our tongue reacts.

In a second step, they tasted several small pieces of food blindfolded. The objective was to recognize the food and then classify it as salty, sweet, sour, or bitter. They were able to do the test with cheese, bread, yogurt, honey, lemon, candy, …

This exercise allowed them to know and distinguish the different basic tastes that food transmits to us, to see to which taste they are more attracted and for some of them to realize that they appreciate the food once they are blindfolded! 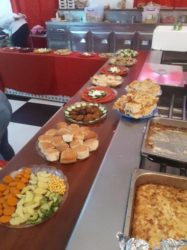 In addition to these workshops, the school organized a magnificent tasting buffet on Thursday lunchtime. The aim was to present different types of culinary preparations.

We guided them as best as possible in their plate composition to make them as balanced as possible, which is not always easy and something I will still be working on over the weeks at the school. The children also had the opportunity to taste several typical dishes specific to the country of origin of each child, which could only reinforce the fact of tasting different things, open their curiosity and awaken their taste buds!